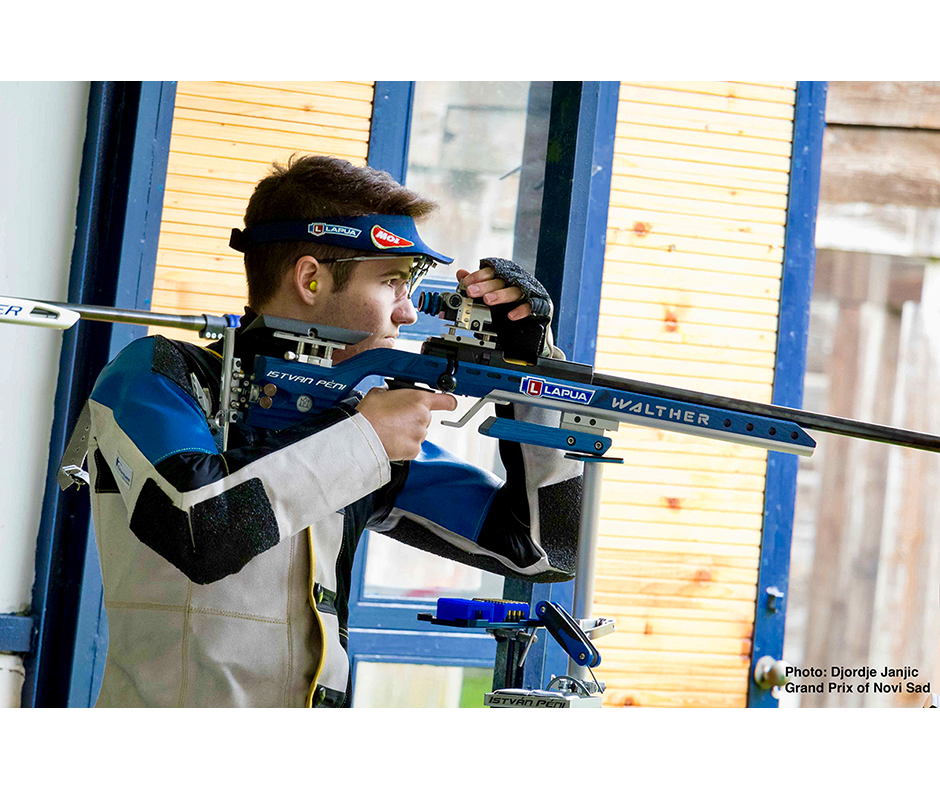 Lapua Athlete of the week: Istvan Peni likes a challenge

At 20 years old, Hungarian István Péni is still a youngster in many senses – yet he is already well known as a skilled rifle shooter on an international level. And he has been around the shooting circuit for a long time, in fact most of his life. “I was actually born into the sport. Both my parents were also shooters at an international level. My father was still an active shooter when I was a child, and he won medals at World and European Championships. From all his competitions he brought me some toy weapons, which I played with all day long. It was always a dream for me to become an elite shooter, so I watched many of his training sessions so I could shoot a little at the end. Until the age of 11 I played soccer, but after an injury I had to stop training for a year. During that period, my father finally brought me to my first shooting training, and from then on, there hasn’t almost gone a day when I haven’t visited the range.”

And he really does mean that; this youngster has a very busy training schedule. “Since I cannot imagine a day without practicing, it comes naturally to me that I spend around 5-6 hours on the shooting range on a regular daily basis. My training programs are different every day but I shoot approximately 200 rounds per training. All in all, during one week I take around 1500 shots. In my opinion, frequent trainings are very important and I always strive to do as much as I can. I also practice with my physical coach 3 times per week because body fitness is very important for having stable results in shooting. Relaxation is as important as practice and I always rest at least one day in a 2 week period. Once a year I take a break of up to two and a half weeks.”

Despite of a hectic training and competition schedule, István is graduating this year from high school, and plans to continue his studies at the University with Business and Management. This multi-talent speaks two foreign languages, English and German, and he even has time for another sport: “I am in love with snooker and billiards. I follow the men’s leagues and I also practice myself, as I have a billiards table at home. So whenever I have time I’ll go and pot few balls.” István resides at the Hungarian capital of Budapest with his parents and sister, a talented designer. The family shares a traditional hobby that also includes rifles; hunting. “I definitely love the spirit of hunting, and I also try to take care of and protect the nature.” A comment that works very nicely with the Lapua Naturalis slogan of Respecting the game.

When it comes to competition, István likes a challenge. “A big challenge for me means big fun in testing my limits. My favorite discipline is 50m 3 position! I think it requires the most shooting skills. Besides finding the perfect settings in every positions and improving my technique, I also need to handle the sometimes tricky outside conditions, and I have to plan multiple tactics and switch techniques during the 2 hours of a match. My biggest challenge in competing is definitely to set new limits every day. I don’t have any specific goals in my career; my goal is to master the skills I need for shooting a strong center.  I have tried almost all of available Lapua ammo and I’ve always had perfect groups and results. For the Rio Olympics I ranked 12th using Lapua Midas.”

István has been to competitions around the world, so which one is his favorite as a competition memory? “So far the competition and location I have liked the most is the World Cup in Bangkok, Thailand. I carry some of the most beautiful memories from there. The first two World Cup series medals which I won there will stay as one of my favorite memories in my whole career. I also like multisport competitions, like the Olympics and the European games. I am friends with a lot of the other National team athletes competing in other disciplines, and the good spirit in the team has a really motivating effect on us.”

Even though István hasn’t set competition-specific goals for this season, he is definitely one to look out for on the international circuit. “This year is my last junior season and I want to prepare very well for the upcoming World and European Championships. I work hard in every training session but mostly I want to enjoy shooting as much as I can. Getting the most out of my abilities with a help of the most accurate ammo of Lapua will hopefully bring us some good results in future. Of course I also consider the Tokyo Olympics. I wake up every day with that goal in my eyes that I want to be the champion there.”