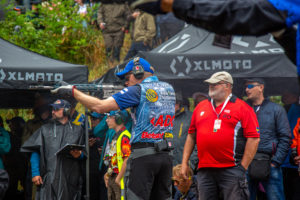 ⁣⁣“The match consisted of 30 stages, with the longest shooting distances being around 320 – 330 ms/yds.⁣⁣ The stages were beautifully designed, utilizing the natural forest surroundings and height differences. Some stages presented really tricky shooting positions and small targets. Absolutely the best organized and well-planned event I’ve ever attended. For me, the competition went great. On the first day I was able to gain a lead of 50 points to my toughest competitors, and during the following days I was able to increase that lead so that at the end of day 4 I was roughly 200 points ahead of the rest. During day 5, I just focused on shooting clean, avoiding mistakes. I used mostly the factory-loaded Lapua 55 gr FMJ, for a few longer distances I used Lapua brass with the 69 gr Scenar and Vihtavuori N133 powder.”⁣⁣

Congrats to the new World Champions and the whole team!⁣⁣